A disturbing image is emerging from the fog of war on the various postmodern front lines. One of them is the criminalization of former Trump advisors and other opposition leaders in an effort the prevent Donald Trump from ever getting to power again. The uniparty establishment has made clear in a number of public statements that “Trump won’t be president at noon, Jan. 20, 2021, even if we have to use the military to drag him out of there.” “If the regime felt that strongly back then, imagine how they feel now! But you don’t have to imagine. They tell you every day”, writes Michael Anton, a former staff member of the Trump National Security Council in Compact Magazine.

Just as the quest for unravelling the steal of 2020 is getting shape, Mark Finchem is reporting on a new steal already in the works. It fits perfectly with the article by former Trump NSC member Michael Anton, also author of the brilliant book “The Stakes”. 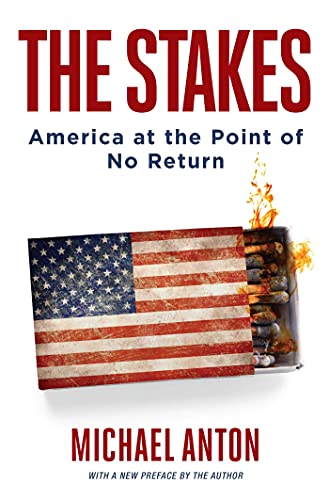 In the article “They Can’t Let Him Back In” published in Compact Magazine Anton writes inter alia:

“And still they try to destroy him. Again, why? I think it’s because, while Trump’s core MAGA agenda is decidedly not outside the historic bipartisan mainstream, it is well outside the present regime’s core interests. Our rulers’ wealth and power rise with open borders, trade giveaways, and endless war. Trump, at least in principle, and often in practice, threatens all three.“

“Anti-Trump hysteria is in the final analysis not about Trump. The regime can’t allow Trump to be president not because of who he is (although that grates), but because of who his followers are. That class—Angelo Codevilla’s “country class”—must not be allowed representation by candidates who might implement their preferences, which also, and above all, must not be allowed.“

Anton poses the question, “how are we supposed to have “democracy” when the policies and candidates my side wants and votes for are anathema and can’t be allowed?” It’s hard not to become cynical at this point, but perhaps they were never democrats to begin with. Perhaps they just liked the label or the sound of the word, which we often noticed they use interchangeable with Socialism. Those on the Left of the uniparty, that is.

In his piece Anton lays out six plans of operation to prevent Trump:

“The Department of Justice is investigating former President Donald Trump as part of its larger criminal inquiry into efforts to overturn the 2020 election, according to a new report. Prosecutors have begun asking witnesses, including top aides to former Vice President Mike Pence, about conversations they had with Trump, his lawyers, and others in his inner circle, sources told the Washington Post” (More on Washington Examiner).

The MAGA movement is feeling good about the prospects of winning the House and the Senate in November 2022 and is confident that Trump will take the Oath of Office in January 2025. While nothing can beat enthusiasm at the ballot box, one or more of the plans outlined by Anton certainly has a good chance of success if we are not exceedingly careful. That sound you hear in the distance isn’t quietude; it’s the elites hatching yet another coup!

Previously in The Perpetual Coup