On January 3, 2023 the new House of Representatives will be sworn in under a GOP majority and a GOP Speaker. Kevin McCarthy has for now been chosen as the candidate, but he is lacking the necessary quorum. In a press briefing the GOP has announced that the following investigations will be conducted in the appropriate committees:
* Corruption of President Biden and his family (Biden Crime Family): Oversight Commitee chaired by James Comer of Kentucky.
* DoJ and FBI Abuse of Power (includes January 6 Capitol Hill riot, FBI raid on Mar-a-Lago etc.) (The Perpetual Coup): Judiciary Committee chaired by Jim Jordan of Ohio.
* Border Security: Oversight Commitee chaired by James Comer of Kentucky.
* Audit into Aid to Ukraine (Wag-the-Bear): Marjorie Taylor Greene (MTG) of Georgia (source).
* Covid-19 origin and response
Not all information has been released. It will be added as it becomes available.

Last night Twitter CEO Elon Musk released the receipts on the collusion of the Twitter 1.0 regime with Governmental entities in order to suppress information on Hunter Biden’s Laptop from Hell, which will shortly be the subject of House Oversight Committee enquiries. Musk coordinated the release with journalist Matt Taibbi @mtaibbi to tweet the information into the world. It is only the first tranche. More is to follow.

Here’s the entire thread in a Threadreader page.

Here are a few key samples:

Some apparently are still bringing up the old red herring of “hacked materials”. Some MSM used that as an excuse why they sat on the information. This is nonsense. The Laptop From Hell was abandoned by Hunter at a repair shop. With Rudy Giuliani’s help the hard drive was delivered to the FBI who took custody, but did nothing. Finally the content was given to selective journalists. New York Post’s Miranda Devine wrote a book about it. 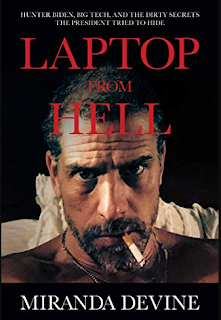 As has now been proved, under pressure of political figures — mainly Democrats — Twitter suppressed the information, as did a host of other mainstream media outlets, thereby effectively covering up crimes, influence peddling, withholding exculpatory evidence in the second Trump impeachment, censoring by surrogate which is illegal in the US, Government interference in the 2020 elections, election fraud and probably a host of other statute violations.

Musk is obliged to expose the crime, otherwise he would be a implicated in covering it up. Which, as history has proved, is usually worse than the crime itself. From a strictly legal standpoint Musk is entirely right to come forward at this point.

The deep state is implicated. The Laptop From Hell was “a Russian misinformation operation”, so arch liar Adam Schiff assured us. A lie that was almost immediately rejected by the Trump National Security Director, John Ratcliffe (source). It is a typical projection case: it was the deep state itself that was engaged in a misinformation campaign.

No less than fifty one Intelligence agents warned the mainstream and social media that the Russians were going to interfere in the 2020 elections. So that when the news of Hunter’s Laptop From Hell surfaced they knew immediately what to do: suppress it! That was the set up.

Polls have indicated that many voters would not have voted for Biden had they had access to the information at the time. This is the smoking gun that the 2020 Presidential Election has indeed been stolen, as Donald Trump has maintained for the start.

What stands out is that former Twitter CEO Jack Dorsey knew little of what was going on. It was mostly General Counsel and Head of Legal, Policy and Trust at Twitter, Vijaya Gadde who led the censoring operation. She was fired by Musk as soon as he took over Twitter.

Here’s Rudy Giuliani’s initial response to the release of the receipts by Twitter.

Dec. 3, 2022 War Room: Mayor Giuliani’s Ready To Advise On The Hunter Biden Laptop And Lock Up All The Treasonous Culprits.

Previously on Drain the Swamp